NEW TOOLS TO STOP THE ITCH 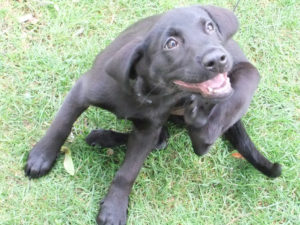 After many years of having dogs, I finally have a dog with allergy problems. Our eight-year old Labrador, Bea, started showing signs of seasonal allergies last year. Before that she had occasionally had a hot spot flair up, but last year she had a stretch of a couple months of itching that needed treated. During the winter months she had no issues, but again this summer the itch had returned. Seasonal allergies like this are called Canine Atopic Dermatitis.

Canine Atopic Dermatitis (CAD) can be very frustrating for dog owners, not to mention uncomfortable for their dogs. Dogs can be allergic to many things including weeds, pollen, grasses, trees, molds, dust, and dust mites. Signs of these allergies include itching, excessive licking, chewing, red skin, ear infections, secondary skin infection, and hair loss. These allergies may last for only a couple of months for some dogs and occasionally may be present all year round for others.

There are many potential ways to treat CAD. The fact that there are so many treatment options means that no single treatment works for every dog. In the past, treatment involved giving cortisone pills or shots. Cortisone was very effective for CAD, but also came with many undesirable short and long-term side effects. For dogs on cortisone for a few weeks, these side effects were rarely a big problem, but for dogs with allergy issues 6-12 months out of the year finding alternative treatments were needed.

Through the years I have tried many other options to control allergies. Antihistamines can help about a third of dogs with itching. Fatty acids supplements can help if given in high enough doses. There are many shampoos and sprays that can alleviate the itch in some dogs, but it requires owners willing to keep up with it several times a week. There are some foods for “sensitive skin” that can reduce itching for some dogs. There are some prescription foods to help with skin inflammation and to promote healing of the damaged skin. Although these treatments are worth trying, none of them work on every allergic dog.

In the last couple of years, two new treatment options have been approved to use in allergic dogs. For the past two years, I have been recommending an oral medication called Apoquel. Dogs with CAD have an increased expression of inflammatory mediators which cause the inflammation in the skin and the excessive itching. Apoquel inhibits the release of these inflammatory mediators to reduce the itching in allergic dogs. Owners can often see a reduction in itching in as little as 24 hours. I have had a few dog owners notice some mild gastrointestinal signs in their dogs on Apoquel, such as decreased appetite and loose stools, but most dogs tolerate it very well.

I started Bea on Apoquel last year when her itching started. She did very well on it and only needed it for a few of weeks before I was able to discontinue it. I started her back on it this year when her itching started, and once again she responded very favorably. Although Bea only needed it for a few weeks, Apoquel can be given long term if need to control the signs of allergies.

The newest treatment option for allergies is a shot called Cytopoint. Cytopoint is not a drug at all. It is more closely related to a vaccine to alleviate the itching associated with allergies. Cytopoint uses engineered antibodies that are similar to the dog’s natural antibodies. These antibodies have been made to specifically target and neutralize one of the main proteins that sends the impulse to the brain triggering the dog to itch. The reduction in itching not only makes the dog more comfortable, but also allows the skin to heal.

Cytopoint can begin alleviating the itching within 1-3 days and typically lasts anywhere from 4-8 weeks. I have been using this for the last 7-8 months. The first few dogs I used it on were dogs with severe allergies and I was impressed with the response. Zoetis, the company that makes Cytopoint, claims that well over 80% of pet owners claim that their dog’s quality of life was improved by using this shot to control allergies and my experience with it is consistent with that claim.

After using Apoquel on Bea a few times this year, I decided to give her a shot of Cytopoint two weeks ago. Giving a shot was just much easier for me than giving pills. Within two days, I was no longer noticing any itching and won’t hesitate to repeat the shot if the itching returns.