THE HOPE AMONG HEARTACHE 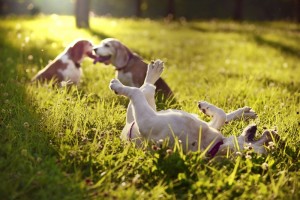 This prison dog program has been going on at Allen Correctional Institution (ACI) for many years. The fortunate dogs that enter the program are picked from shelters and each are assigned to an inmate. Inmates can only be in this program if they meet certain criteria. It is a reward for good behavior, but can be taken away for bad behavior. Each dog assigned to an inmate shares a cell with the inmate. That inmate is solely responsible to care for the dog while the dog is in the program. During this eight-week period, trainers volunteer their time to come once a week to help with the training of the dogs. At the end of the training, each dog is then sent out to a rescue group to find a forever home. The inmates involved in this program become very attached to these dogs, only to have them taken away after a few weeks. Losing the dogs is very hard for the inmates, but soon there is another dog to train.

Katie was far from a typical patient in every way. I first heard about Katie from a friend, Marilyn, who is one of the dog trainers for the prison dog program at ACI. She had come from the Clark County Humane Society. When she arrived at the prison, she was obviously not healthy. She was doing some coughing so had been put on antibiotics, but over the next couple weeks seemed to be getting worse. She was coughing more and not eating well at all. That is when Marilyn asked if I would be willing to look at her to see if she could be helped.

Marilyn brought her into my office and Katie was a beautiful, sweet, 1 year old, yellow Labrador mix. She was very thin and had a pretty severe cough. She had increased, harsh, lung sounds and a slight fever. She had a moist sounding cough. Everything pointed to a “typical” case of a respiratory infection that had progressed to pneumonia, but she otherwise was bright-eyed and our hope was by treating with a stronger antibiotic we could get her turned around.

The reports over the next week weren’t encouraging. She initially showed a little improvement, but then declined. It became very hard to get her to eat anything. She really needed more care than the prison program could provide. Debbie Helser from Deb’s Dogs heard about Katie and decided to take on her care to give Katie every chance to recover from whatever was ailing her. Debbie had Katie transported to my clinic to be re-evaluated.

Katie had lost 3 pounds and her cough was much worse. We took some chest x-rays and her lungs looked awful. Normal lungs on x-rays should be primarily black, but hers were filled throughout with patches of white. My first and only thought about a cause for this appearance in a young dog was some type of fungal infection. This was confirmed by a specialist after posting the x-rays on-line. As recommended, I performed an aspirate of the lungs and submitted it to a pathologist. While waiting for the results, Katie was getting worse. She wasn’t eating at all and started running high fevers. I started the treatment for fungal disease because I honestly had no idea what else to try.
The next day I received the report from the pathologist that Katie did have the fungal disease, Blastomycosis. After being a veterinarian for almost 28 years, this is the first time I have diagnosed a dog with this. This fungus isn’t easily passed between dogs. The infectious form, the fungal spores, are found in soil and inhaled into the lungs from dogs who develop this disease. The incubation period is from 5-12 weeks so Katie most likely picked this up even before she arrived at the Clark County Humane Society.

Over the next couple days we continued treating Katie the best we could. The day after her official diagnosis she seemed much better, but this was followed the next day by her getting much worse. She passed away that afternoon. Everyone fortunate enough to know Katie loved her. If she had recovered, there were several people who would have gladly adopted her in a heartbeat. The hope in this sad story is the number of people who were in Katie’s short life who loved and cared for her. The inmate, Marilyn, Debbie, my staff and myself are terribly disappointed she is no longer with us, but have some comfort knowing we all loved her and did our best to help her. Sometimes it just isn’t enough.