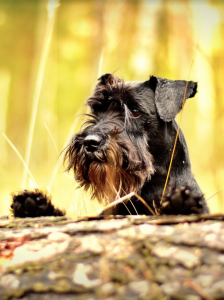 As a veterinarian, there are many days filled with healthy puppies and kittens, annual wellness checks, itching pets, ear infections, and diarrhea. And then there are days occasionally that a pet is brought in and it is a matter of life and death. This was one of those days.

Sadie, who was an eight-year old, Miniature Schnauzer, was carried in by her owner wrapped up in a towel and I really had to look hard at her to see she was still alive. The history I received from Sadie’s owner was that Sadie seemed to have gotten sick suddenly last night when they noticed her vomiting a lot and licking at her backend. They reported she had gotten into the trash a couple of days prior and had a history of doing this but had never gotten sick like this in the past.

I examined Sadie and found her to be very minimally responsive and she was also showing some slight neurologic signs with muscle twitching and tremors. She was laying on her side and made no attempts to sit up at all. She had a mild fever and her belly seemed slightly distended, but she wasn’t painful. I recommended hospitalizing her and doing some blood work to try to figure out what was wrong. I was obviously worried about her trash digging habit and having something stuck in her intestinal tract, but I also mentioned the possibility of a uterine infection to the owner since Sadie had not been spayed.

Within fifteen minutes the blood work revealed the reason for her grave condition. Her white blood cell count was eight times normal indicating a severe infection somewhere. In addition, her blood glucose was only 22! The infection was so severe that her glucose had dropped to a level that can be fatal. I called the owner and told him that I still wasn’t sure where the infection was located but that she was in critical condition and we would start treatment immediately.

I started Sadie on intravenous fluids that had sugar in it and started her on a strong antibiotic. It took about 6 hours before we started to see some improvement in her condition. As her blood glucose rose, her neurologic signs cleared up and she started responding to us better. Soon she was looking around and even started sitting up some for us. Further tests revealed the cause of her problem. Sadie had a very serious infection called pyometra.

Pyometra is caused by normal hormonal fluctuations that dogs experience after they go into heat. Every time dogs go thru a heat cycle, their hormone levels behave just like they are pregnant even when they aren’t. This is the reason some dogs will go thru a false pregnancy a couple of months after a heat, even to the point of developing milk and exhibiting nesting behavior. For the couple of months after a heat, their progesterone level stays elevated. Progesterone lowers the immunity in the uterus keeping the dogs’ immune system from rejecting the puppies if they do get pregnant. If they aren’t pregnant and any bacteria happen to get into the uterus, the infection goes completely unchecked and can quickly become life threatening as occurred in Sadie.

Although pyometra can sometimes be easily diagnosed by noticing yellow, stinky vaginal discharge, it often occurs in a uterus where the infection has nowhere to escape. This was the case with Sadie and the reason she was so sick before the owners even knew there was a problem. Early signs of these cases of closed pyometra are increase in drinking, increase in urinating, lethargy, and not eating. Pyometra is almost always seen 6-8 weeks after a heat. Although the treatment is to spay the dog, removing a uterus filled with infection in a sick dog is a much more serious surgery.

By the next day, Sadie was doing much better and we decided to take her into surgery to remove the infection. During the surgery, I removed the infected uterus as well as the ovaries. She did well with the surgery and the next day was in good enough shape to go home.

Pyometra is a very common disease in dogs that haven’t been spayed. Spaying can not only prevent pyometra, but also prevent ovarian cancer, uterine cancer and breast cancer. I had never seen Sadie as a patient before this, but when I do see young dogs for routine preventive care, I make sure to mention these benefits of spaying dogs. Spaying at an early age would have prevented this potentially deadly condition.